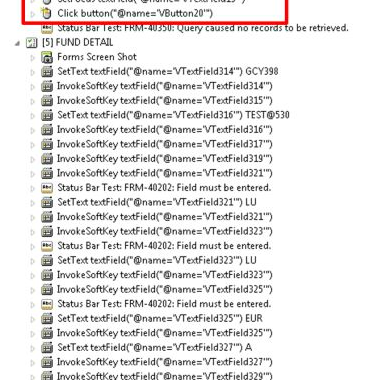 It is strange some times, that Oracle Application Testing Suite identifies Oracle EBS Forms objects with VTextField instead of the actual name attributes, people get crazy when this happens and they wouldn’t be able to fix it, unless they know that they need to set a value for a profile “ICX: Forms Launcher”.

Remember that, these steps need to be performed only if you observe that Oracle EBS Forms objects are identified something like VTextField, which otherwise I strongly recommend you to look out what could be the various possibilities, or you can still reach out to us.
Following steps lets Oracle Application Testing suite identify the Oracle EBS Forms objects the right way:

This all started from a small scenario that occurred recently: Here it goes:

Recently one of my blog reader had faced an interesting problem. In the company where she worked they had a quite a number of test automation scripts which were developed to automate Oracle EBS Forms 10g, later when their customer had upgraded to Oracle EBS Forms 12c , the same scripts weren’t working. Knowing that I had worked on test automation of Oracle EBS Applications with Oracle Applications Testing suite for more than 5 years, she had reached out to me for help. That is when i started asking for various possibilities, I discovered that Oracle Application Testing suite was identifying Oracle EBS forms 12c, but with name attribute value as VTextField. It striked me just then, that we had to set a specific value to make Oracle Application Testing Suite recognize the forms objects the right way.

I hope this helps you and saves your time in troubleshooting to fix it. 🙂